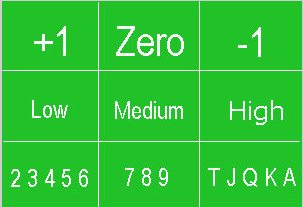 Is Card Counting in Blackjack Worth the Effort?

To calculate the house edge in blackjack exactly requires a computer. The player has advantages in that he has many options, whereas the dealer has none. Also, he can insure against a natural for the dealer. The dealer has one advantage, the biggest. That is that the player plays first. The player always loses when he busts, whereas the dealer may bust having already won the majority of the hands at the table. To say that a tie is a stand- off is therefore not strictly true, as it doesn't apply when both player and dealer bust.

Some players have suggested that card-counting techniques combined with the optimum play, could give players an edge over the bank. The edge crafty players enjoy would be a small one and could still be

obtained at casinos where cards are dealt by hand from one pack, but the use of four packs in a shoe, with up to 50 cards not used, destroys this edge. In any case, the complicated calculations needed are beyond the scope of the average player.

All methods of giving the player an advantage rely on casing the pack, or counting the cards. The simplest is merely to count the 10-value cards, which constitute nearly a third of the pack. If the unplayed part of the pack is rich in cards of value 10 and the dealer's faced card is below 7, he must draw and has a good chance of busting. The player might decide to stand on a low count of 12 or 13, knowing that he has a better than even chance of winning.

More complicated counting requires the player to calculate how many cards remain of various groups: aces, 10 & court cards, medium cards (6-9) and low cards (2-5) and vary his strategy accordingly. This is very hard work, and in most cases the order of the cards played will be unexceptional and result in no significant advantage in counting them. It is more profitable to look at the best plays assuming a normal proportion of each rank of cards in the shoe.

There is still argument among experts about some of these plays. The table in these cases takes the side of caution, advising to double down only when most experts agree it is best. The table does not apply to games (i.e. all those in Britain) where the dealer does not declare blackjack before the players play out their hands. Most disagreement among experts occurs with the best play when holding 16 against a dealer's up-card of ace or 10- count, when some advise hitting, and with the play on soft hands, when some advise always hitting with totals of 17 or less, and others advise doubling down with a count of 13 to 17 whenever the dealer's up-card is 4, 5 or 6.

← The Story of Yesterdays Marked Cards
Basics of Blackjack →