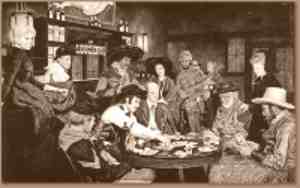 The Story of Yesterdays Marked Cards

Improvements in cheating always developed steadily over the couple of hundred years since serious land based card playing evolved. It's part of being human. One side comes up with a scam, the other finally figures it out and counters it, and then the previous side invents a new angle.

Back in the day, the smooth fingered card sharks added "stamped" or marked cards to their bag of tricks. Marked cards first appeared during the 1830s and originally their use was a secret closely kept among a select few.

Curiously enough, gamblers who played with marked cards made their greatest killings against fellow ethically challenged card players who relied on legerdemain to win. Riverboat gamblers usually made up their own distinguishing signs and had packs manufactured for them in New York, Chicago, Cincinnati, or New Orleans. Boastful gamblers, rather than manufacturers, sometimes confided their secret to friends, and soon the use of stamped cards ceased to be the monopoly of a few.

Stamped cards were strictly American; European laws forbade them. But American manufacturers became so blatant they even began to send out illustrated circulars showing their own special marking systems. Dr. Cross of New Orleans was probably the pioneer in this field. He bought cards with bare backs from New York makers and stamped them with plates of his own or gamblers' designs. A Mr. Bartlett of New York carried on an equally lucrative business along the same lines and continued producing his dishonest merchandise long after Cross quit in 1854, right up to the 1870s.

The distinguishing stamps were so cleverly hidden in the playing card's ordinary pattern that not even the keenest and most experienced cardsharp could point out the difference between a regular and a marked card unless he was given the key. Crooked cards had the great attraction of enabling men to win whose fingers were not deft enough to yield them a profitable living.

It was customary for gentlemen who played cards aboard steamers to buy them from the bartender. Card sharks or otherwise known as sharpers generally took him into their confidence immediately upon coming aboard and, for a share in the winnings, he took care to deliver the special cards only to the right group.

In today’s world, licensed online casinos are regulated and regularly audited. The casinos themselves can’t tamper with the games provided by the software company which makes every game fair and uncompromised.

← Luck of the Cards, Divine Intervention or just luck
Is Card Counting in Blackjack Worth the Effort? →