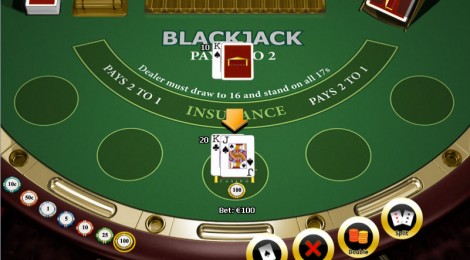 Chance plays a large part in blackjack, but the skillful player still enjoys a big advantage over the novice. Certain players have been banned from blackjack in casinos, which is proof that they have, however momentarily, been able to transfer the hypothetical house edge from the bank to themselves.

Blackjack has been for a time the most popular card game in Las Vegas casinos and has become popular elsewhere. The name "Blackjack" arose when an American casino, in an effort to popularize the game, paid a bonus to any player holding the ace of spades and either the jack of clubs or jack of spades. The hand, and later the game, took the name Blackjack. Only comparatively recently have rules become standardized, and even now conventions differ in various casinos.

Four packs are used which are shuffled by the dealer and cut by a player. All cards have their face value, with court cards counting as ten except the ace, which when held by the player has a value of one or 11 at his discretion. When the dealer holds an ace, it might also have a value of one or 11, but its value is governed by the casino rules.

The object of the game from the player's point of view is to obtain a total card count, with two or more cards, higher than that of the dealer, but without exceeding a maximum of 21. Should the player's count exceed 21 he is said to have busted, and loses his stake. Before the deal, each player puts up a stake in the betting space before him. A player may play at more than one space, but must play the hands independently from his right to left. The first card dealt is discarded. The dealer then deals a card to each player face down and one to himself all face up. He then deals a second card face-up to each player, and a second card, face down, to himself.

If the dealer's face-up card is an ace or a ten count, he must look at his other card (if it is an ace he must first ask players if they wish to insure, as is explained later). If he has a total of 21, he faces it and announces twenty-one or blackjack. A two-card total of 21 is known as a natural or blackjack. A natural 21 is the highest hand, and the dealer wins all stakes, unless a player also has a natural, in which case his bet is a stand-off. When the dealer does not have a natural, he deals with each player in turn. If the player has a natural, he wins, and is paid at odds of 3-2, as the table stakes. All other bets are paid at 1-1. Otherwise he may stand or draw a further card or cards. He will stand if he is satisfied with his count, or if he judges a further card night bust him. If he wishes to draw he will beckon for another card, or, as is common in America, say 'hit me', when the dealer will give him another card face up. The player may continue to draw cards until he is satisfied with his count. If in drawing he busts, he must announce it, and the dealer collects the stake and burns the cards into the discard pile.

← Is Card Counting in Blackjack Worth the Effort?
Books on Winning at Blackjack? →