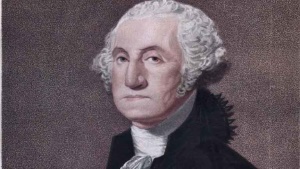 George Washington's account books show that before the 1776 War of Independence playing cards was one of his particular pastimes. He often won or lost as much as 9 pounds a night and even during the Revolution he played cards. Of course he couldn't expect his soldiers to desist, with the result that gambling became pandemic and so he issued orders that all games of chance were forbidden.

Two of the most flamboyant and successful industrialists in Pennsylvania at the time were Robert Coleman and Baron Harry W. Stiegel. Every Saturday night the two men played cards together for moderate stakes. When the war broke out Coleman and Stiegel immediately enlisted as privates in a Lancaster County militia regiment. They shared a tent during the war and continued their cards, but now the stakes were high, especially before battles. Coleman won mostly and when the baron had no more money to gamble, he risked his other assets.

One by one Coleman won Stiegel's interests in his ironworks at Elizabeth Furnace, Charming Forge, and Bowling Springs, then the Manheim warehouses and glassworks, as well as countless acres of land rich in timber, ore, glass sand, and undeveloped water power.

After Stiegel was honourably discharged he tried to make a comeback but failed and landed in debtors' prison. When he was finally released, he taught school till his old card-playing comrade found him and made him chief bookkeeper and accountant, most of which Stiegel had lost at the gaming table.

Gambling was just as rampant on the other side. In cities held by His Majesty's forces, loyalist owners of taverns and inns catered to British officers and card games went on all day and horse races were promoted. One such race announced a ladies subscription purse of £50 and a race by women, quarter-mile heats.

An international contribution to gambling was made by the French army officers who invented a game on which they gallantly bestowed the name of "Boston" as a token of regards for the great city. Its biggest popularity was achieved many miles away, in New Orleans, where its greatest enthusiasts were the aristocratic Creoles and wealthy businessmen. The ebb & flow of many New Orleans fortunes were affected over the years by high-stake games held in the "Boston Club," named to celebrate the players favourite game.

The Continental Congress appointed Thomas Jefferson to draft a Declaration of Independence. It is said that he retired to meditate on its stirring words. In fact Jefferson kept an expense book and notations for the three weeks indicate that he sought a normal amount of relaxation during the period by playing games of chance.